The “Blue Beauty” of the black sea.

Probably the most famous Soviet Destroyer at the beginning of the war was the Tashkent, also rapidly nicknamed the “blue beauty”. This was one of the many collaborations of the Italians to the rebith of the Soviet Navy, through several designs and technical advisory. Let’s cite among others the assistance of the Ansaldo yard for designing the Kirov class cruisers, which brings some uncanny similarity with the contemporary Italian cruisers.

Also this influence was clearly visible on the contemporary mass-produced Gnevnyi class destroyers, for which Italian engineers provided assistance all along the design process and during construction.

Arrival of the Tashkent in 1939, without armament.

For the Tashkent, this went even beyond, for the most striking result. The black sea admiralty drew plans in 1935 for a destroyer leader, part of the same year plan. The previous generation, the Leningrad class leader destroyers (six ships all named after large cities) in 1933, were built locally by Marti, Nikolayev, Zhdanov, Komsomolsk, or Dazlavod, and were inspired by the French large “Contre-torpilleurs“.

But they later revealed themselves top-heavy and poor seaboats with in addition, five years of construction that made them obsolescent after entering service. However, they were the first major warships built in Soviet Union at that time and were considered at least a success start. However for the next generation, planners seeked again italian assistance, in order to study the design for future classes.

The new destroyer was started in January 1937, built in a record time and launched in november, and delivered unarmed in February 1939 by OTO Yard at Livorno. She was armed in USSR and quickly tested in 1941, painted with an unusual light blue scheme which earned her the nickname “blue cruiser” and “blue beauty”. She was not only among the most strickingly handsome warships ever put at sea, but also very fast and well armed for a destroyer. The idea was to have a class prototype for a future production.

Design of the Tashkent

The blueprint was more of less something like an enlarged “Navigatori” with a much better armament and a more than generous powerplant. As a result, the Tashkent displaced no less than 2893 tonnes standard, 3200 at full load, for 140 m (458 ft 6 in) in length. Her designed armament of three twin turrets was only added in 1941. On trials and in service she saw excellent sea going behaviour and stability, and gave all satisfaction.

Her true limitation appeared with war operations: An inadequate AA protection, like most destroyers of this generation which were completely outmatched by the speed and capabilities of modern aircrafts. The Tashkent was totally unarmoured. Her hull was riveted with a raised forecastle and 15 compartments, but the strength was not up to requirements and Soviet engineers decided to increase it for the Project 48 destroyers (Kiev class).

The Tashkent was given two funnels, connected to four large Yarrow boilers housed in two separate compartments with alternating boiler rooms, feeding two shaft geared steam turbines for a total of 110,000 hp (up to 130,000 hp with forced heating, 97,000 kW at 350 rpm), an impressive raw power which traduced in high performances: Nominal service speed was 39 knots, but on trials she easily reached and maintained 44.2 knots with force heating.

This was a far cry of the 36 knots (with half the horsepower, though) of the previous class. Although the raked funnels, and blended superstructures in a rounded, uniquely shaped enclosed command bridge were of no help in aerodynamic terms, they participated in this impression of speed that recalled the popular streamline style that ruled car and locomotive design in that era.

When the Tashkent arrived in the black sea, she presented three masked platforms, as she came without armament. This was as much to avoid political turmoil for a Fascist country to deliver an armed warship to a Communist Nation, but to test a purely Soviet weaponry that was to be fitted in the next generation of ships, like the destroyer of the Ognevoi class and follows-up of the Tashkent, the new Kiev class.

However the planned twin turrets 130 mm (5.1 in) B-2LM turrets could not being installed upon reception by the future Admiral of the Black Sea Fleet, Lev Vladimirsky. He ordered to fit provisionally three single 130mm/33 under masks on the planned positions for the turrets. The final turrets arrived in late 1940 and fitting completion arrived in early 1941.

In addition, six 0.5 in heavy machine guns (12.7 mm) were added als in single positions, on front and rear platforms, while the original 45mm were all concentrated around the aft funnel (and later the 37 mm). For close-quarter combat, the Tashkent was given three banks of 21 in torpedo tubes (533 mm) in triple banks, one between the funnels, and the two others aft of the second funnel, all three on surelevated superstructure. As a result, the Tashkent was also a roomy ship.

In August 1941, the Tashkent gave up a bank of torpedo tubes in favor of a pair of 75 mm (3.0 in) AA guns.
Tashkent served with the Black Sea Fleet, fighting during the Siege of Sevastopol and making 40 supply trips through the German Blockade. In his memoirs Captain VN Eroshenko noticed this feat: “The leader «Tashkent» steamed 27,000 miles, escorted without loss of 17 transports, carried 19,300 personal, 2,538 tons of ammunition, food and other goods into Sevastopol.

She also fired 100 rounds and silenced six batteries, damaged one airfield, sank a torpedo boat and shot down and damaged 13 enemy aircraft.”. Not bad for a ship that showed that was more to meet the eyes than solely nice lines. However any such story ends one day, and the German Luftwaffe was now firmly in place to create havoc on the black sea.

On 28 June 1942, Tahskent was attacked once more by a swarm of Junkers Ju 87 “Stuka”s, and was badly hit and severely damaged, taking 1900 tons of water before the emeregency team working with makaroff gear and pumps could contain the flood. She was towed by the destroyer Bditelnyi and all the way back to Novorossiysk, but foundered in the harbour several days after, on 2 July 1942. Only gun turrets were salvaged, finding their way on the destroyer Ognevoi. The Germans would later partially scrap the wreck, but the Soviets would eventually broke the ship in 1943 after taking back the harbour.

Tashkent in her final livery and armament, summer of 1941.

This ships were nominally follows-up of the Tashkent. Ordered in several yards in 1939. Four ships named Kiev (launched december 1940), Ochakov, Perekop, and Yerevan (launched june 1941) built at Marti yard, Nikolayev (Kiev and Yerevan), and 61 Kommmunar yard (other pair), the latter being never launched and scrapped in situ.

The third five-year plan included 12 ships as far as the sources goes, with a first batch of six. The project B-1 was an improved Tashkent design, with a stronger hull (length 127.8 and beam 11.7 m), but also a reduction in displacement to follow a specification for a smaller radius of action.

Other orders, six more ships (1 Black Sea, 3 Baltic and 2 Arctic) were ordered but not laid down and cancelled in the summer of 1941. Only the hulls of Kiev (49.8 % complete) and Yerevan (25.4 % complete) were evacuated to Poti in August 1941 for completion, which never materialized. Both were used as target ships and sunk in 1950. 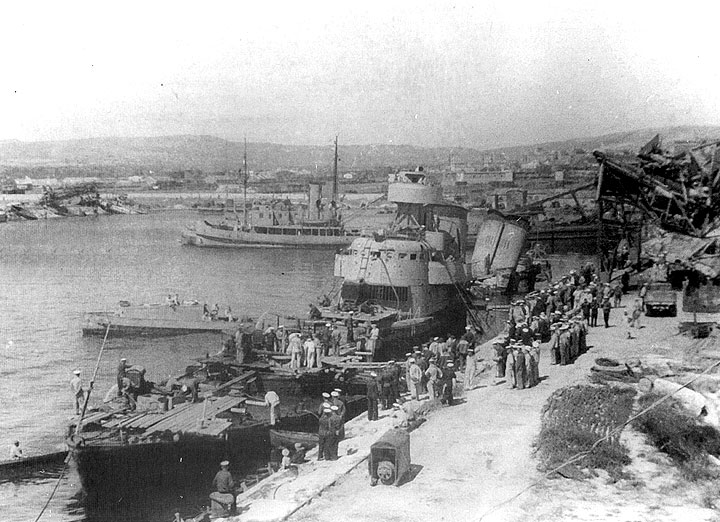 Tashkent with her provisional armament in 1939

Tashkent in the summer of 1941, before receiving her additional AA artillery.