Bulgaria, backed by the Black Sea, inherited ancient Thracian populations mixed with the peoples of Central Asia at the time of the great invasions around 400 AD The Kingdom of Bulgaria was born in 681. It will fight constantly against ambitions of the neighbouring states of the Balkans, then from the fall of Constantinople, against the Ottoman Empire which would finally ruled the land from 1396.

However, the forced Islamization of the country was only strong in Albania. Local youth were often pressed into military service (trained boys, the famous Janissaries). In 1876, an insurrection, supported by the Russians and confirmed by the victory of the Russians during the war of 1877 against the Turks will bring the country to a de facto autonomy within the Ottoman Empire, following the Treaty of San Stefano in 1878.

In 1885, by acquiring Rumelia in the east, Bulgaria offered herself an outlet in the Aegean Sea. It was not until 1908 that Bulgaria would fully recover its independence. As early as 1896 there was already an embryo of a fleet by arming three steamers, a training ship and seven other small vessels on the Danube while deploying three small steamers on the Black Sea.

Balkans war, WW1, and the interwar

Involved in the war of the Balkans, Bulgaria gained no territory extension. However, she went during the first world war alongside the triple alliance (Central Empires) but lost, resisting well against a whole coalition. For the Bulgarian Navy in WW1 see the dedicated page. 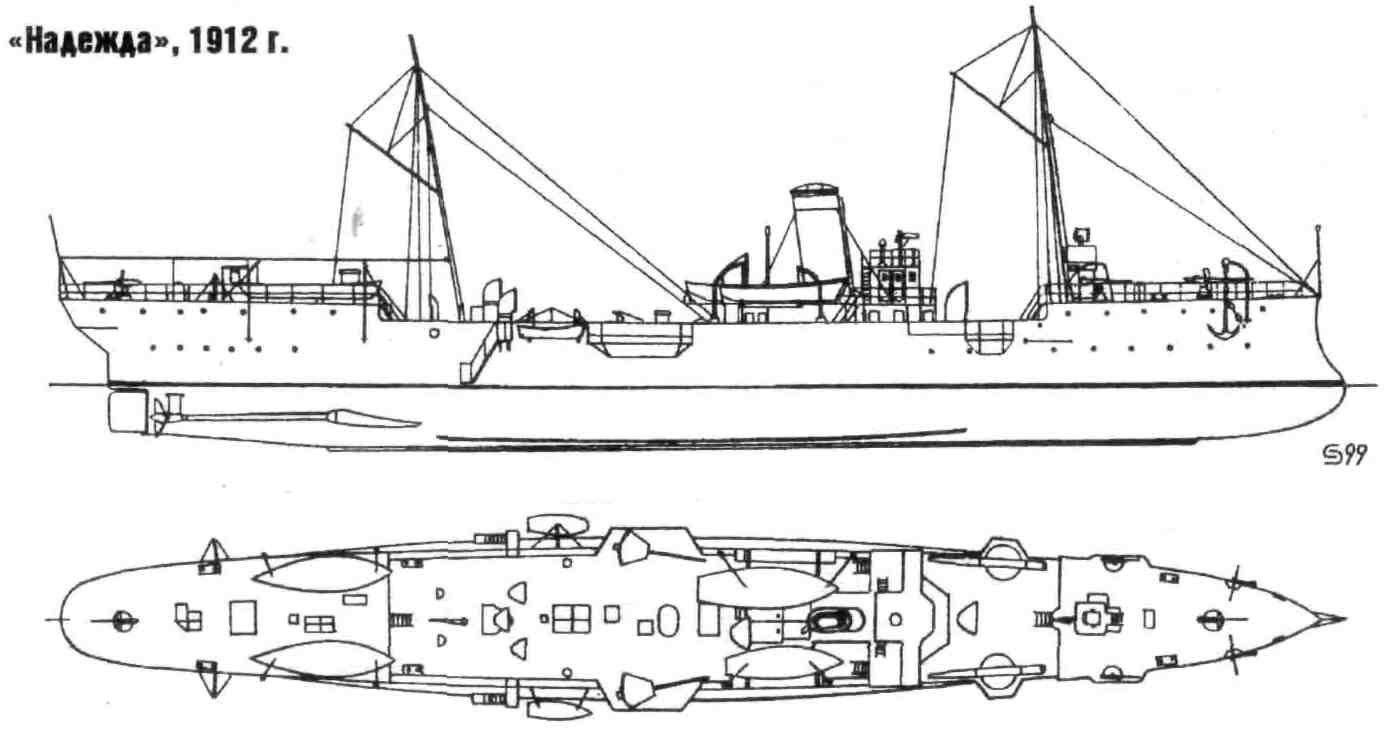 The torpedo Gunboat Nadezhda (1898) was no longer listed active in WW2 for good reasons: She has been abandoned at Sevastopol in December 1918.

Following the Treaty of Neuilly signed in 1920, the small fleet was disarmed and it was only allowed to keep some coastal defence ships: The 4 torpedo boats of French origin (Drski class) and 2 patrol boats also acquired in France, former minesweepers. On the other hand, the national budget was allocated to the construction of an important merchant marine. From the 1930s, especially after Hitler’s accession to power in Germany, Bulgarian authorities began to denounce in turn the Neuilly Treaty, which they considered humiliating. They also made a rapprochement with Germany and Italy.

In 1938 they repudiated it and signed a new treaty with other Balkan states. Free to create a larger navy, Bulgaria however still did not have the means to do so. As early as 1937 a financial agreement was signed between Bulgaria and Germany, and on the eve of the war the Bulgarian Navy received four modern torpedo-torpedo boats, undoubtedly more valuable than the old French models, and the latter were modernized.

Drski class torpedo boats: Still active during WW2, they already saw action in the 1912 Balkan war and WW1. But these veterans were from a Normand 1906 design and were considered second rate. German S1 TBs were however deployed much more actively.

Composition of the fleet

In 1939 by the standards of the time, the Bulgarian Navy was a fourth-rank one, with only a gunboat as “major” vessel, and some limited coastal assets.

Acquisitions during the conflict:
From 1940, three former Dutch Motor torpedo boats (Type T52 MTB) has been captured by the Germans in 1940 in construction at Schiedam, and were quickly completed and transferred to Bulgaria in 1942, after seeing some service in the Kriegsmarine. Of British design, they were equipped with British planes engines shot down in Europe, which had some consequences on the noise and consumption of these ships; But nevertheless they were by then among the best assets of the Bulgarian fleet, essentially a Torpedo boats fleet.

Bulgaria during the war

Contrary to popular opinion, Bulgaria refused to participate in Operation Barbarossa, the invasion of USSR. It was drawn later by German pressure to declare war on the United States and UK on 13 December 1941, which caused Sofia to be bombed later by allied aviation. However, despite the lack of official declarations, the Bulgarian Navy skirmished with the Soviet Black Sea Fleet in several occasions, since the latter attacked Bulgarian shipping. On another note, Bulgarian armed forces in the Balkans fought resistance groups and partisan movements. But up to 1944 Bulgaria had maintained diplomatic relations with the Soviet Union, while as a paradox, still being a member of the Axis.

Operation Varna: This fleet operation was about setting minefields off the Bulgarian coast by a mixed Romanian-Bulgarin fleet. The Romanian minelayers Amiral Murgescu, Regele Carol I and Dacia, were escorted by torpedo boats Năluca, Sborul and Smeul, and the gunboats Sublocotenent Ghiculescu and Căpitan Dumitrescu while the Bulgarians provided the Drazki, Smeli and Hrabri. The operation took place between the 7 and 16 October, leading to place five minefields in order to protect Bulgarian shipping. The only loss registered was the minelayer Regele Carol I due to a soviet mines while Romanian mines sank four Soviet submarines (S-34, L-24, Shch-210 and Shch-211), perfectly fitting their task. From then on, the Soviet Navy was much more careful in these waters and tried to catch Bulgarian shipping farther on their trip. But in total, the Bulgarian Navy would lost one torpedo boat and a single steamer.

In the summer, Soviet offensive approached Bulgaria and on 23 August 1944, the Bulgarian government swapped sides and declared war on Germany. Soviet Union troops invaded the country without encountering any resistance and soon captured the important port cities of Varna and Burgas. In the former harbour, arsenal and naval yard they captured the bulk of the Bulgarian Navy, which was by then operated by the Soviet Navy and returned after the war.

In total six of these has been ordered to Schneider, Chalons-sur-Saône in France, completed in 1908-1909. At the time France had the largest fleet of torpedo boats in the world and passed for master in this category. It was originally 6 units of the type “38 meters”, the Drzki, Smeli, Hrabi, Strogi, Letjashchi, and Shumni.

The second group of three was completed in 1909. They were designed in sections and conveyed by rail for final assembly in Bulgaria. They saw heavy action in the 1912 Balkan war as well as WW1, where two were lost: They participated in the First Balkan War of 1911-12, but were interned in the second in Sevastopol. Returning to Bulgaria in 1914, they participated in the war on the side of the central empires. Shumni was sunk by a mine off Varna in September 1916, Strogi also was damaged and repaired. and Letyashchi wrecked on 28/11/1918: She was captured by the French in Varna and was lost on a reef in September 1918.

The remainder were still active in the interwar, spared by the peace treaty but after removing their torpedo tubes. So they were converted as had oc minelayers for a time, from 1922. Indeed the TBs has been hidden. In 1934 they had been comprehensively modernized, with a new more substantial bridge, a deckhouse, an observation pole, and funnels caps. They saw their torpedo tubes reinstalled in original configuration head-to-tail, but their fixed bow tube was disassembled.

As patrol boats they had been armed with two 20 mm cannons. At the beginning of the Second World War, they were rearmed with their original 47 mm guns and in complement received two heavy machine guns and a rack for six ASW grenades. They participated in patrols in the Black Sea until captured in 1944 by the Soviets.

Druzki was sunk at Varna in 15/10/1942 as a result of internal explosion. She was salvaged and in 1945 and commissioned again. Smeli capsized in 19/5/1943 during a storm off Burgas, lost with all hands. Druzki, Khrabri and Strogi were captured on 09/09/1944 at Varna by Soviet troops. Two were commissioned in the Soviet Navy as TSs Ingul and Vychegda. They were retro-ceded in 1945, decommissioned in 1954 and scrapped, except the Drzki, preserved as a museum in Varna since 1955 where she can be visited now.

Rare Photo of the Druski in 1942, Jerzy Micinski Coll.

These four MTBs were ordered to Lürssen, Vegesack. A fifth was kept in Germany and was renamed S1, taking the name of the first German S-Boote, sold to Spain a year later. Plans for more were signed but none was ever laid down as the war broke out. They were similar to the S2 serie which was sold to the Nationalists. They patrolled during the war until 1944, without loss or specific event. All four were captured by Soviet troops in Varna in September 1944. They were taken over by the Soviet navy, renamed TKA-958 to 961 and retro-ceded on 2 April 1945 to Bulgaria, but their fate is uncertain.

These three boats were former Dutch T52 class motor torpedo boats built at Gusto Werf, Chiedam. They were seized by the Germans when they occupied the Netherlands. They were based on a British power boat design and two were completed by the Germans to be used experimentally as S201 and 202. In 1942 they were transferred to Bulgaria. Later a third was also completed and sent to Bulgaria while four more were sent to Romania. The engines, as reported, were captured British aircraft models. All three were captured at Varna by Soviet troops and integrated into the Soviet navy as TKA-962 to 964 and returned to Bulgaria in April 1945. Their fate is unknown but two were discarded in 1960.

Built in Germany as part of the 30 billion Reichsmark aid Bulgaria received, these three coastal submersibles to be names I, II and III were to be built at Germaniawerft, Kiel, receiving an order from the Bulgarian government in 24/5/1939. They would have displaced 413 tons, with two diesels for 16/8.5 knots and armed with just five TTs, four in the bow and one in the stern. In dimensions they were between German boats of II and VII series. However the Germans cancelled the contract as the war went on, 10/06/1940.

To be noted here, the Bulgarian once operated a submersible, during WW1: The Podvodnik was the ex Germaniawerft UB-8 (1915) sold the next year to Bulgaria, and ceded to France as war reparation in 1919.

A complementary fleet was composed of armed civilian ships used as patrol boats. The most significant were the training ships Assan and Kamicia, the armed tug Voievoda, patrol boat Ganekura, which were all captured by the Soviets in September 1944 and retroceded in April 1945, with the exception of the Voievoda which was sent back to the Yugolavs where it saw service first (Captured and transferred by the Germans).

Notes:
After the war, Bulgaria acquired two destroyers:
-In 1947 the WW1-era destroyer Korfu (Novik Type, Russian 1916 Fidonisy-class). She was renamed Zheleznyakov and served until 1949, sent to USSR which scrapped her in 1957. A pretty impressive career for a ship that knew three regimes and three wars (agreed, the last was cold :)).
-Bulgaria would also operate, this time under Soviet supervision, the former Project 30K destroyer Georgi Dimitrov, from 1949 to 1960 where she served as a training vessel, eventually stricken in 1963.
-In 1949 she also acquired from USSR three ww2-era (completed 1944) M-1 class submarines, operated until 1949 and returned to USSR, and in 1958 she received two Whiskey class submarines, Slava and Pobeda.
-In 1958-59 they also operated two former Soviet Project 122a large submarine chasers (N°281 class), several NO911 torpedo attack craft in 1947-48 modernized in 1957.

Conway’s all the worlds fighting ships 1922-46 page 363
On navypedia.org
http://www.netherlandsnavy.nl/Special_mtb.htm