The Naniwa and Takachiho (浪速型防護巡洋艦 Naniwa-gata bōgojun’yōka) were the first Japanese protected cruisers. They were also considered at their completion, the most advanced and powerful cruisers in the world.

Since naval industry in Japan was in its infancy, there was no skills available to design, let alone to built a cruiser. Until the start of the century, Japanese authorities ordered many warships to the British and French, learning skills and transferring technology in the process. This was a bit like China in the 1980s. The Imperial Japanese Admiralty estimated this intermediary type of cruiser, the protected or “second class” cruiser was a more potent way to patrol trade routes and protect Japanese distant interests, with more firepower and speed than a gunboat.

Such ship can also perform scout missions for the fleet, or even replace a battleship for small navies. Such was the case with Japan, barely out the meiji era. Also major concerns over China through the Korean case drew attention of the recently updgraded Chinese Beiyang Fleet, on paper quite superior to the IJN.

William White, the chief engineer and general manager of Armstrong Whitworth, at Elswick in UK, then a largest warship’s yard in the world, delivering ships for export in droves, created a ship tailored for foreign customers. A a fraction of a price of an ironclad, they could have a faster, well protected ship, armed with heavy artillery. This was a seductive package and White soon the company received orders, starting with Chile, in rivalry with Brazil and Argentina. White designed the Esmeralda and was asked soon after by the Japanese government to draw a derivated design for the IJN. The latter indeed sent falous naval architect Sasō Sachū, pioneering Japanese naval architect to Great Britain in order to aquire this Elswick design.

Both were ordered under the 1883 fiscal year budget, by Naval Minister Kawamura Sumiyoshi, for a global budget of cost £546,980. For the anecdote, the minister was given a toast during a dinner by with Baron William Armstrong, saying “the ship was destined to the service of a country which was likely never to come into collision with our own peace-loving country”.

The revised design by Sasō Sachū produced a very powerful yet cost effective ship as stated, compared to pre-dreadnoughts. It was a perfect fit for a young and budget-restricted IJN. Saso Sachu when in Eslwick asked modifications compared to the Esmeralda, with changes in weaponry like Krupp guns, changed in armor thickness and raw machinery power, for a slightly better speed. Their hulls were typically flush deck, symetrical, and with the high freeboard required for seaworthiness in the Pacific.

The hull received a ram blended into the reinforced bow. Both main guns were in barbettes with a rather flimsy armored shield, intended to deal with shrapnells. The rest of the artillery was classic, in side sponsons, tailored for the usual line of battle tactic.

Two two-stage horizontal steam reciprocating engines (rated for 7000 hp) drove two shafts, propelling the ships up to 18 knots. This was not blazing fast but for the time, already at least three knots faster than any battleship.

Press extract from Jane’s – Notice the ship is labelled an “ironclad”, which is telling volumes about its protection Both ships of the Naniwa class were armed with two 10 inches or 260 mm L/35 Krupp guns. This main battery was quite impressive for a cruiser of such displacement, but that was the same concept as the Esmeralda. By their range they could hit a battleship and escape through their speed, unharmed. However the rate of fire was absymal. It is difficult to find informations about this rather rare model, no longer used during WW1. The standard 280 cm was derived from it. 200 rounds were provided per gun, HE and AP.

Secondary armament
This comprised six 6-in or 152mm L/35 Krupp guns, or 15 cm Schnelladekanone Länge 35. They were quite a popular model, also exported to Austria-Hungary, China, Denmark, Japan, The Netherlands, The Ottoman Empire, Romania and Spain. It was soon adopted by early ironclads (modernized), protected cruisers, turret ships and coastal defense ships.

Her trump card was speed: It was designed around a 1.33 m (4 ft 4 in), 68 kgs single piece round for fast-firing. But due to the weight of the rounds, many navies asked the rounds to be split up down to a more classic and manageable two part quick loading cased charges. In fact, this way, the rate of fire was even better.

Compound armor is likely to have been used, (a mix of steal and teak), as Harvey armor appeared later in the 1890s as well as Krupp’s hardened face steel. The Naniwa class were protected by 50 to 75mm thick deck armor, with the secondary guns protected by 37mm shields. The conning tower has walls 150 mm thick (6 in). It was better than the Esmeralda, though way below the lever of protection of a battleship. 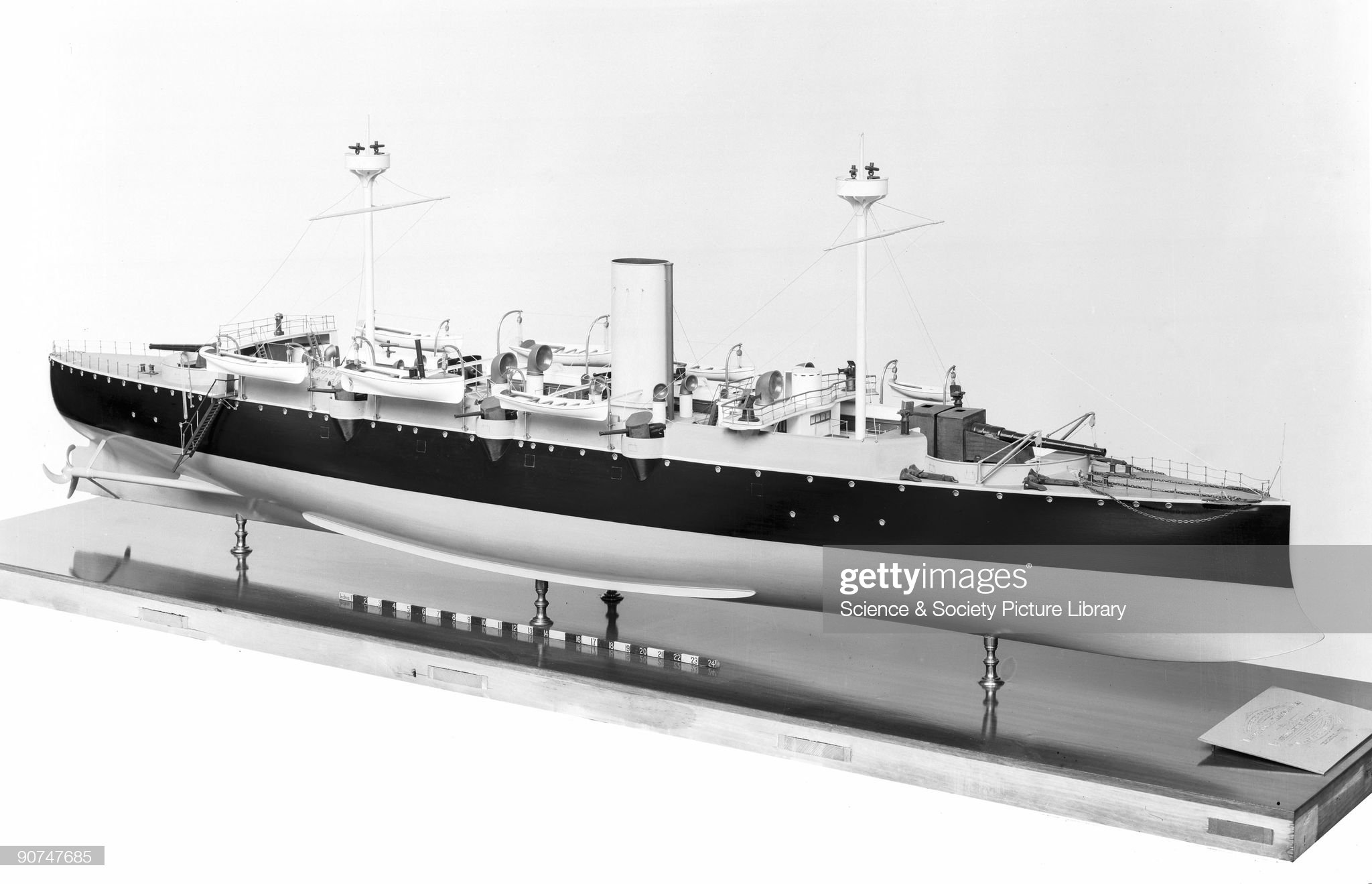 Career of the Naniwa & Takachiho

Both ships were active, but it was cut short before WW1. Anyway their superiority was short lived. In 1890 already due to the extremely fast development of technology, weaponry and armor their design supremacy did not last long. Naniwa was launched 18 March 1885, and completed 1 December 1885, same completion date as Takachiho.

The frst Sino-Japanese war broke out in 1894 and the Naniwa and Takachiho joined Admiral Itoh Sukeyuki’s “flying squadron”. Both fought at the Battle of Yalu River (or Yellow river), but only IJN Naniwa was present as the Battle of Wei-hai-wei, and later during the invasion of Taiwan. At Yalu, Naniwa help destroying the Jingyuan and Zhiyuan but she also took a 210 mm hit, fortunately with little damage.

Photo of the Naniwa’s crew, taken at Newcastle

Naniwa also fought at the Battle of Pungdo 25 July 1894 off Asan in Korea, at the opening of the hostilities. She was part of the “flying squadron” with the cruisers Yoshino and Akitsushima, detached from the main fleet to join the cruiser Yaeyama and gunboat Oshima from Chemulpo, sailing to the island of Pungdo, to patrol the western coast and intercep possible reinforcements. However due to communication breakdown, the Yaeyama and Oshima remained at Chemulpo.

Nevertheless the cruiser Jiyuan and torpedo gunboat Kwang-yi in Asan sailed to join the transport Kowshing and gunboat Tsao-kiang from Tianjin. Near Pungdo they were spotted and fired upon by the flying squadron and the battle started. Both Chinese ships were badly hit, the Kwang-yi was sunk and the Jiyuan fled, with the flying squadron in hot pursuit. The sinking caused a diplomatic incident between Japan and Great Britain, later resolved by lawyers.

Naniwa was also part of the invasion of Taiwan, and shelled on 3 June and 13 October 1895 the Chinese coastal forts of Keelung and Takow under command of the future ww2 admiral admiral Kataoka Shichirō. At the time the USN attacked the Spanish fleet at Manila, the Naniwa has just been redesignated 2nd-class cruiser in March 1898. She was based in Taiwan, patrolling the area from the Philipines to Taipei.

Both sister-ships intervened during the “Black week”, when US marines and Europeans overthrown the Hawaiian monarchy. Japan and the United Kingdom on their side tried to help the provisional government, Naniwa’s marines being landed to protect Japanese citizens and assets in the Island. There were indeed a frenzy of anti-Japanese sentiment at that time. In 1900-1901 Naniwa’s main battery was removed, replaced by lighter Elswick QF 6 inch /40 naval guns. This bring her more stability and the same standard as the rest of the fleet.

At the start of the new century, this was the Boxer Rebellion, and IJN Takachiho was sent to China, supporting Japanese troops at Tianjin with a reinforcement of Marines.
When the Russo-Japanese war broke out, Naniwa took part in the Battle of Chemulpo Bay.

During the Russo-Japanese war, Naniwa was based at Tsushima and participated in the Battle of Chemulpo Bay. Asama, Naniwa, Takachiho, Chiyoda, Akashi and Niitaka attacked assisted by TBs advanced elements of the Russian fleet and badly damaged the Varyag, which was later captured and incorporated into the IJN. On 10 March 1904 with her sister-ship she participate in the blockade. At the Battle off Ulsan on 14 august 1905, Naniwa help sinking the armoured cruiser Rurik, and later recuing survivors.

At Tushima she was the flasghip of rear-admiral Uryū Sotokichi, part of the Fourth Division of the Combined Fleet. She was damaged but was repaired back in Japan and subsequentely patrolled the northern seas off Hokkaido. In 1912 she has been relegated as a survey ship, mapping the Kurile Islands’s coast. Without modern equipments, this was a dangerous task, and she ran aground coast of Urup, foundered and declared a constructive loss after all atempts to two her failed. She was stricken from the navy’s lists.

IJN Takachiho had about the same history, including the refitted with modern British guns in 1901, Boxer rebellion, and Russo-Japanese War, in the 2nd Fleet under the overall command of Vice Admiral Kamimura Hikonojō. On 28 August 1912 she was relegated as 2nd class Coastal defence ship and converted as a minelayer and mine recovery training vessel, one of her 152 mm gun removed to free space for mines. When the war broke out on 23 August 1914, Takachiho as sent at Tsingtao, the German naval base, to assist the siege. However by 17 October 1914 she was attacked by the German torpedo boat S90, 10 nautical miles southeast of Jiaozhou Bay, torpedoed and sank. She was one of the rare Japanese ships sunk by the German Navy…