A concentrate of innovations

Caio Duilio was the lead ship of the namesake class of ironclad turret ships, built for the Italian Regia Marina in the 1870s. The name recalled Roman Admiral Gaius Duilius. The Duilio was started in January 1873, launched in May 1876, and completed in January 1880. The class also comprised the Dandolo, and both replaced the sail and steam Principe Amedeo-class ironclads (1865), both missed the battle of Lissa. The Duilio class was designed by Cuniberti, and the first Italian steam-only ones. Strategically, they fitted with Italy’s large naval expansion program pitted against Austria, compounded by new possibilities offered by the opening of Suez Canal in 1869.

Blueprint of the Duilio, showing the short and concentrated “all or nothing” armour scheme.

The most powerful artillery in the world

The centerpiece of this Ironclad was a main battery of four 17.7-inch (450 mm) guns, then the largest ever put on a ship afloat worldwide. The following classes Italia class, (designer Benedetto Brin) were laid down in 1876, and the Ruggiero di Lauria class, (designed by Giuseppe Micheli), in 1880, all kept a powerful, unmatched heavy artillery. Originally the design was intended to carry Armstrong 35 t muzzle-loading guns. However the plans were modified several times during the lengthy construction, and eventually the largest guns that Armstrong produced, next to 60 t (59 long tons; 66 short tons) has been envisioned, but the choice fall ultimately on to the 100-long-ton (102 t) 450 mm gun proposed by the firm. 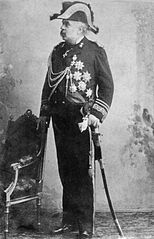 She was still capable of a top speed of around 15 kn (28 km/h; 17 mph). Both ships had a small superstructure forward, including the conning tower and a funnel, connected via a hurricane deck to a central military mast and aft superstructure, joining the second funnel. First ironclads in any navy to get rid of sails they had a crew of 420 officers and men (later 515). Both carried a number of smaller boats, but Caio Duilio also had a compartment in her stern, to house a small torpedo boat of the 26.5 t Clio class. This also was unique at that time. This gave an additional “torpedo range” well beyond the range of artillery. This TBD could also perform reconnaissance missions.

The armour was forged by French firm Schneider-Creusot. There was a steel belt armor 21.5 in (550 mm) thick at its strongest section, protecting the ship’s magazines, and machinery spaces. Central citadel and gun turrets received had nickel steel armor. Transverse bulkheads were installed, 15.75 in (400 mm) thick. The armored deck was 1.1 to 2 in (28 to 51 mm). Gun turrets had 17 in steel plate, but Enrico Dandolo’s new turrets (1898) had only 8.8 in (220 mm). The bow and stern were left unarmored, but they subdivided into a cellular “raft” to keep the ship for flooding. In fact this was a radical solution for the time as armour only protected the ships’s engines and ammunition magazines.

This “all of nothing” configuration sparked controversy when Royal Navy Edward James Reed visited the ships under construction. The new Italian Minister of the Navy, Simone Pacoret di Saint-Bon, replied during a Parliament session that such flooding event was very unlikely, as it needed all the bulkheads of the watertight compartments being HS.

This Italian Ironclad was named after the 42nd Doge of Venice. The ship was laid down at La Spezia on 6 January 1873 and launched on 10 July 1878.
Its design was similar to the Duilio, with similar armour, configuration, and powerplant made of two vertical compound steam engines each driving a single screw propeller. Its first assignation were the annual fleet maneuvers of 1885, in which it served as the flagship of the 1st Division, “Western Squadron”, under command of Vice Admiral Martini. This exercise took place off Sardinia with an attacking Sqn and a defending “Eastern Squadron”, in a Franco-Italian war scenario.

This was followed by the 1888 fleet maneuvers, and the ship was later flagship of the 3rd Division of the Active Squadron for the 1893 exercises. There was a full reconstruction (1895-1898) to a new design under Inspector Engineer Giacinto Pulino supervision. The major upgrade consisted in the addition of quick-firing 10 in (250 mm) guns (in replacement to the former 450 mm battery), and she received a new secondary battery. A new engine was also fitted, but performances stayed the same.

In 1901, Enrico Dandolo joined in the 2nd Division. It was in the Active Squadron in 1902, with Andrea Doria, Francesco Morosini, three Re Umberto-class ironclads, and the new pre-dreadnought Ammiraglio di Saint Bon. In 1905 she was transferred to the Reserve Squadron, and later versed to the Gunnery School as a training ship. In the 1911-12 Italo-Turkish war, She was versed to the 5th Division of the Italian fleet (ironclads Italia and Lepanto) but saw no action. In 1913 she was sent as a guardship at Tobruk, Libya, and transferred to Brindisi and then Venice during the war. She was eventually stricken on 23 January 1920 and later sold for scrap. 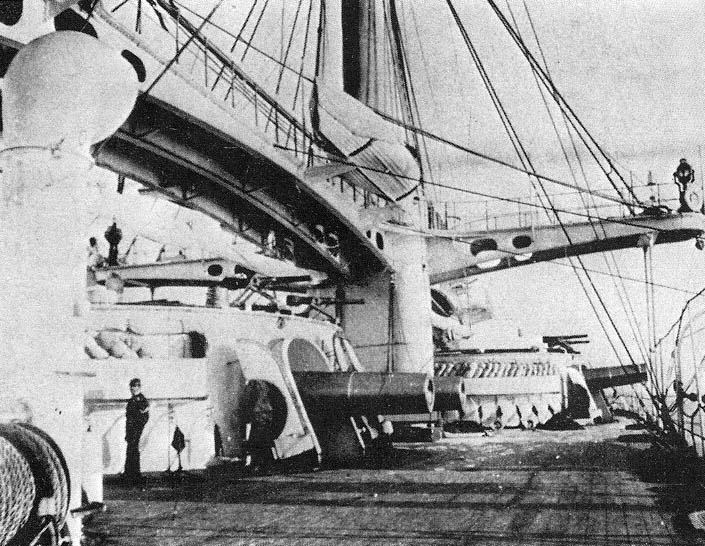 Details of the Duilio’s central battery

Caio Duilio’s career was uneventful, spending her first two decades with the Active and Reserve Squadrons, in charge of training maneuvers and exercises. The Ironclad was withdrawn in 1902 and only employed later as a training ship, until 1909. At that time she was converted into a floating oil tank, renamed GM40. Its ultimate fate is unknown.

Duilio class on Wikipedia
About the Caio Duilio
About Benedetto Brin
Specs Conway’s all the world fighting ships 1860-1905.