These two armoured cruisers succeeded the unique Marco Polo. Criticisms of the latter (armament and armor too light) led the engineers under the direction of Edoardo Masdea to design much heavier ships (7000 tons at full load against 4800 to house a battery of 12 pieces of 152 mm instead of 6). Despite everything, they did not possessed really heavy artilley pieces, unlike those that fitted other contemporary ships. Started in 1892 in La Spezia and lauched in 1895 and 1896, they were completed in 1898 and 1899. The two ships differed in their masts, the Pisani having a single central mast while the Carlo Alberto had two masts. They would serve later in the first tests of the Marconi TSF on the high seas, which were realized in 1902 and were crowned with success.

Vettor Pisani was previously the name of a corvette that left Italy in 1882 for a three-year voyage round the world. The new Armoured cruiser designed for the Royal Italian Navy (Regia Marina) was just 99 meters (324 ft 10 in) between perpendicular, and was 18.04 meters (59 ft 2 in) wide, so about 1/5 ratio. These were bulky ships by cruiser standards. Their crew comprised 28 officers and 472 to 476 enlisted men.
Powerplant
They had two vertical triple-expansion steam engines, and two propeller shafts. Eight Scotch marine boilers with exhausts trunked into a funnels pair amidships provided the steam, coal-burning. They were designed for a maximum output of 13,000 indicated horsepower (9,700 kW). Top speed was 19 knots (35 km/h; 22 mph) also as designed, but both ships exceeded this in sea trials. Their coal reserve gave them a range up to 5,400 nautical miles (10,000 km; 6,200 mi) at a 10 knots cruise speed (19 km/h; 12 mph), sufficient for the Mediterranean and beyond and justified by their 7m draught.

The Pisani was built at Castellammare di Stabia, a Royal Arsenal. In 1900, during the Boxer Rebellion, the cruiser was flagship of Rear Admiral Candiani, commander of the Cruising Squadron dispatched to China. She later stopped at Japan, Korea and Vladivostok before returning at La Spezia in 1902. Se then returned in Asia on 15 April 1903. A wireless communication was succesfully tested between the Italian Legation in Peking off the coast of China. This was one of the first ship-borne long-range radio transmissions worldwide. Carlo Alberto did even better. She returned in home waters in 1904, and nothing is noted until a cruise in Greek waters in 1908. Her first serious engagements occured in the Italo-Turkish War of 1911–12, she was then flagship of Rear-Admiral Prince Luigi Amedeo, Duke of the Abruzzi. The cruiser, accompanied by five destroyers sailed in the Adriatic and then to the ionian sea, and made contact with two Ottoman torpedo boats, just a few hours after the war was official. One fled, the other was beached. Prevesa was blockaded and threatened to be shelled, followed by an ultimatum. However the endeavour stopped there as it threatened Ottoman-controlled Albania by the Austro-Hungarian Empire and the government backed up. In April 1912, the Pisani, together with the 1st, 2nd and 4th Divisions departed from Taranto to the eastern Aegean Sea and shelled the Dardanelles forts. The cruiser made another sortie in June with destroyers.
When WW1 broke out, the ship was obsolete but maintained in service throughout in the Adriatic. She participated shelled a rail line near Ragusa Vecchia (Dalmatian coast) in mid-1915. But later the loss of Cruiser Giuseppe Garibaldi and Amalfi severely restricted the activities of Venice squadron. The Pisani was converted as a repair ship in 1916 and stricken on 2 January 1920, sold for scrap and broken in March. 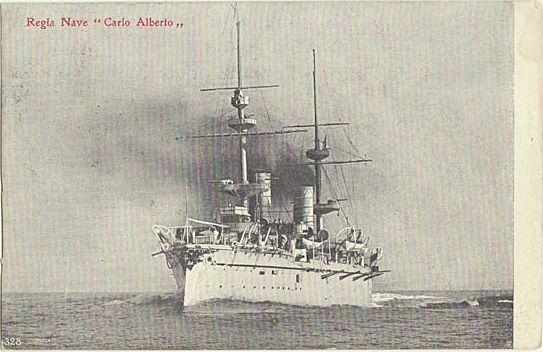 The italian armoured cruiser was named after King Charles Albert of Sardinia. She was buit at the Arsenale di La Spezia. Her first deployment was in South America and she was back home in 28 February 1899. She was sent to the Far East right away and returned in June 1900 and then she was assigned to the Mediterranean Fleet. She served as the royal yacht for Victor Emmanuel III, and was to attend the Coronation of King Edward VII and Queen Alexandra in 1902.

However the latter being delayed to the summer, she became base ship for Guglielmo Marconi’s radio experimentations. The cruiser also took Victor Emmanuel to a meeting with Tsar Nicholas II of Russia, in Kronstadt and then returned to England before the coronation ceremony. In the wake of this International event of crowned head she participated in the fleet review at Spithead. On the return voyage Marconi conducted long-range experiments from Poldhu, Cornwall, an the Carlo Alberto in September for more testing. He renewed experiments from Glace Bay, Nova Scotia for more radio messages across the ocean and in December, from Glace Bay to Poldhu.

Later on, Carlo Alberto was sent to Venezuelan waters in 1902–03, with an international force for the country’s refusal to pay foreign debts. She was deployed in Salonica and From 1907 to 1910 she served as a gunnery and torpedo training ship. From 1910 she returned to her role as initial cruiser. She participated in the Italo-Turkish War of 1911–12 as an active training ship, shelling Tripoli, and supported assaults on Zanzur, Zuara and in Tripolitania. She later remained in the Aegean Sea until 1913. During WW1 she was based in venice but was not active. In 1917 after a service without notable events, she was taken in hand for conversion as a troop transport. On 4 April 1918 she was renamed Zenson and returned to service in that new office until 1920. She was later stricken from the Navy list, and sold to a scrapyard.


Illustration of the Carlo Alberto (1/750) by the author