One of the most interesting commerce raider ever put at sea in the Great War was arguably the SMS Seeadler (sea eagle). She was the single, most successful sailing commerce raider of the war, a brillant concept that made in general sailing ships the most inocuous-like predators imaginable. There were two Seeadler during the war in fact. The first was a 1888 cruiser of the Bussard class, decommissioned in Dantzig by March 1914.

Built as Pass of Balmaha

The Seeadler in our story was a three-master windjammer built Pass of Balmaha by Robert Duncan & Company yard, Port Glasgow, in Scotland. She was launched on 9 August 1888, designed as a steel-hulled ship-rigged sailing vessel, 1,571 GRT, typical of the late trade tall ships, most of the time relegated to carry bulk, whereas more interesting, fragile, precious or urgent cargos went by steamers. These tall ships were cheap and theferore they still counted for a very large part of the merchant fleets of the time. Many of these masses of testimonies of a bygone era are still with us, usual hosts of many world’s maritime events. About 60 of these tall ships, preserved or used a school ships marvels the young generations. For example the French Merchant Navy alone aligned 2,556,000 tons of merchant ships, of which 701,000 tons were sailing vessels. Of her 29,300 fishing vessels immatriculated in 1913, 27,000 were sailing ones*. And a huge proportion of these were sunk, mostly because of submarine warfare. They were slow and easily spotted targets. So much so that their proportion went down from 1/3 to 1/15 or less, compounded by new construction of modern freighters. WW1 was a killing ground for tall ships, the great cleaner of old traditional vessels. And in this maëlstrom many tall ships used to carry anything crude bulk, like coal or guano. So the idea of converting one of these as an auxiliary cruiser would have been seen far-fetch to german authorities. But that’s exactly what’s happened and why:

The Pass of Balmaha began her career flying the colors of David R Clark, from Gibson & Clark, Glasgow, immatriculated 95087 with signal letters KTRP. Like many ships of that era she was no longer bankable and was sold at Leith for £5,500 in 1908, on the Firth of Forth, pending another buyer. In 1910 she was sold to a new owner, Pass of Balmaha Co Ltd, based in Montreal. She passed under George I Dewar, Toronto supervision, and was later owned by the Harris-Irby Cotton Company at Boston, US flag. She served for two years during the war without incident, until her trip from New York Harbor in June 1915 to Arkhangelsk loaded with a cargo of cotton for Russian troops. She was intercepted by British auxiliary cruiser HMS Victorian off the coast of Norway and inspected, but soon her captain smelled contraband. The British ship left on board a prize crew of an officer and six marines to comply the ship to join Kirkwall in the Orkney Islands for a thorough inspection. By then she alternated the stars and striped of neutrality and the Union jack. She went on crossing the path of U-36 in the North Sea in 1915. U-36′ Captain Ernst Gräff stopped her, made warning shots and started the usual boarding inspection, ending with the capture of the ship as he was unsure of the ruse, and the ship was ordered to sail to Cuxhaven with an ensign left on board. The American crew, resentful of the British had the British marines locked in the hold. At Cuxhaven they were made prisoners while the Americans were cleared to return home. Meanwhile the ship was mothballed, waiting for a decision.

At a time the british blockade of the North sea began to really empede German war efforts and hurt civilian population, it was clear that the lack of coaling points and colonial bases to resupply German commerce raiders meant their cruises were rather short and dangerous. A sailship on the other hand, had no problem whatsoever resupplying, and was such an improbable commerce raider, an inocuous vessel, that it was the perfect cover. Therefore the tall ship was taken in hands for a reconversion, with an auxiliary engine, hidden traps for 105 mm cannons under the main deck, prisoner rooms, two hidden heavy machine guns, and rifles for boarding parties. These weapons were rarely fired, and many of the 15 ships encountered by the Seeadler were sunk by a few shells when everybody was in safety, with only one single accidental enemy casualty during the entire journey. Von Luckner’s immense popularity after the war, on both sides, is certainly due to the very humane treatment of his “war”; he considered all sailors as fellow citizens of the sea, and had the ship modified to accomodate large and comfortable housing for the captured crews, even a luxurious mess for captured officers complete with a library, piano, champaign and served the same food as the german officers and crew; Each time his technique when approaching a ship was imparable, and showing the guns was enough to trigger a surrender. The sole casulatly was a freak accident provoked by a shrapnell when a third warning shot hit the ship by accident. The Seeadler doctor tried to save the young radio but after a few days he passed out, and was given full military honours. At one point however in his cruise, Von Luckner had to release his numerous “guests”, onboard a captured schooner that had her masts partly cutoff to sail at the slowest pace possible to the nearest port, and therefore only giving a position that was no longer relevant.

Seeadler’s rampage from the fall of 1916 to early 1917, through the Atlantic and south pacific.

The Seeadler began her new career on 21 December 1916, sailing under the command of Kapitänleutnant Felix von Luckner, a larger-than-life swashbuckler and adventurer later nicknamed “the Kaiser’s pirate”. The ship then was transformed into a Norwegian wood carrier to cross the British blockading line, even after being boarded for an inspection ! Indeed Von Luckner has handpicked his crew part for their fluency in Norwegian. That was the brillant start of 225 days of rampage in two oceans, capturing 15 ships in the Atlantic and Pacific. The tall ship gained so much fame that she was chased by many British and American ships and at one point became their #1 hunting priority.

Cornered, she took refuge in Polynesia, but was stranded on a reef of the island of Mopelia, 450 km from Tahiti (Society Islands). Von Luckner and part of his crew headed for Fiji, but were captured and thrown in jail. The 126 tons French schooner Lutece was indeed captured by the remaining crew on 5 September 1917, sailing to Easter Island but running aground in October when arrived and they were interned by the Chilean authorities.

Engraving of the sinking of the French sailing brig Cambronne, 20 march 1917.

Officially Der Seeteufel (the Sea Devil) in the press, and called by the British Count Luckner, and his crew “Die Piraten des Kaisers”, this German nobleman was born in Dresden, Germany. He was the great-grandson of Nicolas Luckner, a Marshal of France in the Napoleonic era, commander-in-chief of the French Army of the Rhine, who was elevated to the rank of Count (Graf) by the King of Denmark. Young Luckner was fascinated by the sea, but family traditions imposed him to follow a military formation to serve in the cavalry. The boy failed his exams at various private schools, and at thirteen fled his family, joining a port city to come back later “with honour and the Kaiser’s uniform”. He nearly escaped death after falling overboard from the Russian tall ship Niobe, where he served, unpaid, under the name of “Phylax Lüdecke”. At Fremantle, Western Australia, he accumulated various odd jobs like kangaroo hunter, circus worker, professional boxer, then he moved to South America, he even became a guard in the Mexican Army, ended as a barman and tavern keeper. At one point he was in jail in Chili, and took refuge in Jamaica, pennyless. At age 20, he went back to Germany, joining a German navigation training school. He worked for some time onboard ships of the Hamburg-Südamerikanische Line, and engaged in the Imperial Navy, from 1912 on board SMS Panther.

Luckner saw action at the Battle of Heligoland Bight (1914) and at the Battle of Jutland he commanded a gun turret onboard SMS Kronprinz Wilhelm. When Germany started converting merchant ships into raiders, they also captured at some point the Pass of Balmaha, later modified with hinged gunwales, an auxiliary engine and other additions, and a captain familiar with tall ships was to be choosed. Von Luckner seemed to have by then the best profile. Next very successful raiding career began, without fatalities (but one) which ended in the Pacific near the Society Islands, the ship being anchored off the lagoon of Mopelia. But wether she was struck by a Tsunami or broke her moorings, the ship went on the reefs and sank. Stranded, the crew and prisoners managed to get provisions and use the two rescue boats to attempt a sortie. Von Luckner decided to rally the Fiji Islands and capture a sailship, then return to the atoll. His 10 m (33 ft) long open boat was named Kronprinzessin Cecilie and rigged as a sloop. They reached Atiu Island, took more provisions, pretending to be Dutch-American mariners, and then reached Aitutaki, as Norwegians. Then, they rallied Rarotonga by night and headed to Fijian Wakaya Island, after a 3700 km travel. However their nationality trick failed, and summoned by the police, they surrendered. Back at Mopelia the remaining party managed to capture the small French trading ship Lutece, and set course for South America. They landed in Chile and were interned until the end of the war. Meanwhile, Von Luckner was not to stay prisoner, he escaped with his crew during the Christmas night, seizing the motorboat Pearl and made it for the Coromandel Peninsula. From there, they captured and departed with the 90-ton scow Moa, heading for the Kermadec Islands, but they were caught eventually by the pursuing auxiliary ship Iris, and this time were made all prisoners in New Zealand for the remainder of the war, with extra security.

After the war, Von Luckner married in Hamburg and became a Freemason of the Lodge Zur goldenen Kugel (Große Landesloge von Deutschland). He wrote a book about his wartime adventures which became a bestseller, followed by another book by Lowell Thomas which helped spread his adventure in the Anglo-Saxon world. From 1926 he financed the acquisition of the sailing vessel Vaterland and embarked for a good will tour starting in the US. An entertaining speaker, he spoke on hundreds of occasions across the country, perfecting his English. He met many celebrities and the city of San Francisco made him an honorary citizen. He eventually went back home in 1928. In the late 1930s, Von Luckner started a worldwide voyage with his own yacht, the Seeteufel. The Nazis tried to engage him for propaganda, but failed, and perhaps in retorsion he was afterwards falsely implicated in a scandal and had to retire from public life, his bank accounts frozen. He saved the life of a Jewish woman in 1943 and embarked for the United States. Around Halle at the end of the war, he negociated the town’s surrender to the allies. After the war, he moved to Sweden, living in Malmö with his new wife until 1966 when he passed out at 84. His extravagant life was adaptated in a French-German TV serie of 39 episode called “Graf Luckner” in 1973 while a Count Felix von Luckner Society was created in his memoir in Halle. 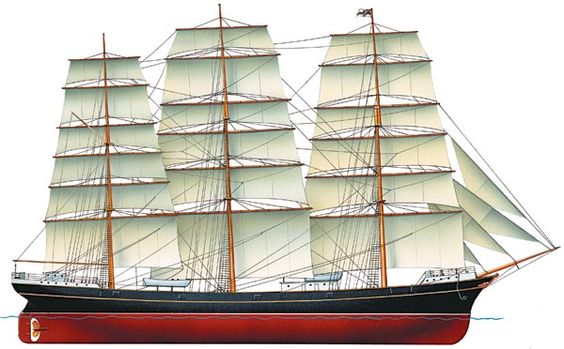 Profile of the Seealder in 1916 (Unknown origin).