The French Navy was under the influence of the ‘Jeune Ecole‘ (‘Young School’) during the years 1820-1909. There has been a collection of concepts and experiments to compensate the French inferiority in numbers compared to the arch-rival, the Royal Navy, by innovation. France has been very active in the development of a new artillery shell (Paixhans incendiary shells), adoption of steam on capital ships, first ironclad, and innovative submarines and torpedo boats.

One of the most crucial aspects of her fleet was the apparent lack of coherence in battleships; There were literally no homogenous classes built during the 1880-90s and up to the arrival of Admiral Boué de Lapeyrère. The latter decided to stop this absurd trend and concentrate on more conventional homogeneous and large classes of battleships and battlecruisers.

Unfortunately the war broke out before his plans, passed onto his successors, could see the light of day.
Therefore the French Battleships fleet was separated into three distinct groups, 1914 dreadnought classes (Courbet and Bretagne), 1909 pre-dreadnoughts of the Republique and Danton class and “Jeune Ecole” era pre-dreadnoughts which were for the most part, quite unusual. Their most distinctive and common traits were their lozenge main battery with single side turrets, heavy military masts and pronounced tumblehome among others. But certainly among the weirdest oddballs of this collection was the Henri IV.

Louis-Émile Bertin (1840-1924) was certainly one of the most colourful and influential of these French architects and engineers. He won international recognition as naval architect in 1871 and was himself well influenced by Dupuy de Lôme, author of many French avant-garde designs of the 1850-70s. Many saw him as his rightful inheritor. Among other things he was sent to Japan, helping shape the Japanese Navy of the early 1890s, and notably designed their flagship, the Matsushima, earning the Order of the Rising Sun after the Japanese victory over China in 1894.

He became also Director of the School of Naval Engineering in France, Director of Naval Construction. However he was found at odds with Admiral Aube’s Jeune Ecole architects and both would be virulent in critics. Bertin supported the idea, before the dreadnought era, of a lightly armored, heavily-gunned cruiser.

However he also had innovative ideas about using water as a protection. The strange semi-submerged spar torpedo vessels of the 1860s (including civil war ships such as the Spuyten Duyvil and Stonewall Jackson) steel rams like the British Polyphemus an the French Taureau toyed with the idea of partially submerging the hull and delete straight walls in order to deflect rounds. The Union riverine ironclad USS Monitor in a sense, describe as a “raft” used water as a natural barrier, offering little or no target above the water. Therefore at some point in 1895-6, Bertin lobbied the minister in order to evaluate some of his ideas on a new battleship. This was to be the Henri IV (Reformer French king of 1589-1610).

He was willing to take the exact opposite of Jeune Ecole battleships such as the Hoche. Another infamous 1889 oddball Kaiser Wilhelm once famously described during a naval review “what nice target”. The Hoche was also nicknamed by French crews the “grand hotel” by derision. The Henry IV was instead designed to offer the smallest target possible, yet offering the same firepower. However many compromises led to radically revise the design and ended with a curious long range coastal battleship of some sort. This was as he described it as a sea going monitor, based on the Bouvines class. He wanted the ship to be unsinkable and very stable. Henri IV was laid down at Cherbourg on 15 July 1897 and launched on 23 August 1899, but was only operational in 1903. Construction cost has been 15,660,000 francs.

Contrary to the common practice of the time which consisted in making a pronounced tumblehome in order to gain stability and make the ships higher, a characteristic of French Battleships of the time, she was designed to present the smallest target possible. In order to achieve this, the normal rear superstructure was deleted altogether and it was limited to a casemate-like to support and elevate the rear turret. Indeed the rear freeboard was so low the Turrets risked of being washed out. The rear hull indeed was only 4 feet (1.2 m) above water (at nominal displacement as design) and was anyway much smaller and lighter than usual battleships of the time, 2,300 metric tons (2,260 long tons) less in fact, the weight of a protected cruiser.

The upper deck height amidships and bow however were made as a traditional forecastle for better sea-keeping and provided much-needed accommodations in a cramped vessel. The superstructure was narrow, recessed from the hull above the main deck however. The superstructures were compact: A conning tower on which was mated the bridge, one enclosed and one open above, immediately backed by the thick military mast behind. Then followed the two funnels and a single pole mast before the rear secondary turret support, in superfiring position above the main aft turret.

For stability reasons, the most important decision was to cut down the main artillery to just two turrets, fore and aft. There was no room for large main gun single turrets like in French contemporary battleships. Instead secondary barbettes and turrets took place in the side superstructure. The ship’s small size and Bertin’s own ideas favored a simplified armament for heavier maintenance, a blessing compared to other battleships of the time which could have six-seven different calibers on board.

The secondary armament was comprised of seven 45-cal. 138.6 mm (5.46 in) Canon de 138 mm Modèle 1893 guns. This was far less than the secondary battery of contemporary the HMS Canopus, twelve QF 6 in (152 mm) guns. However they were faster-firing on paper, 35–30 kg (77–66 lb) projectiles at muzzle velocities of 730–770 m/s.
Four were mounted in casemates on the main deck, facing the sides, front and rear at 180°, and two on the shelter deck with gun shields. The last one was mounted on the shelter deck turret in a superfiring position, a first for the French Navy and for the world. However the ship’s small dimensions meant it was placed very close to the main gun turret aft. The barrel in fact was too short to clear the sighting hood of the turret below, causing problems with the blast when firing. She was extensively tested notably by cramming sheeps inside the turret below and apparently they did not suffered ill effects of the blast at first.

Bertin conducted experiments in 1894 for this formula and improved in fact on the armor designed previously for the Russian battleship Tsesarevich. However it was too close to the sides, there was no room for damping any shock. The main turrets faces and sides were protected by 305 mm (12.0 in) of armor, and their ammunition shafts and barbettes were 240 mm (9.4 in) thick. Casemates for the secondary 138 mm guns were about 75–115 mm (3.0–4.5 in) thick, whereas their own ammunition wells were 164.7 mm (6.48 in) thick. Given the small size of the ship and main armament, it was fairly decent. The total weight of the armor was 3,528 tons, or 40.1% of the ship’s total displacement.

The Henri IV in service

The battleship Henri IV entered service only in September 1903, woefully obsolete by that time. Completion dragged on for almost four years as problems accumulated and has to be solved. At last prelimianry speed trials took place on 19 february 1903. They show quickly serious stability problems contrary to what Bertin planned: The roll was twice that of contemporary battleships. Indeed the very low freeboard made water rushed over the bridge everytime and the added wight of the water aggravated the problem. In the end it was very difficult to correctly point the artillery. Also a heavy shell in plunging fire could still penetrate this low-freeboard rear part of the ship and flooded the engine rooms quite quickly. Although henri IV was built as a 2nd rank battleship she did not complied to this and was rather considered as a high seas monitor rather than a battleship at all. She ended the trend and proved to be of little value during the war, between her use as guardship or used for artillery support.

The ship was attached from the beginning to the Tunisian naval division. She was only active in coastal defence and port protection and made no cruises and squadron exercises contrary to other French battleships of the time.

The ship was a guardship at Bizerte, Tunisia when the war broke out.
Three of her 138.6 mm guns were dismounted in November 1914, sent by rail from Salonica to reinforce the French naval mission to Serbia, the “Mission D” expeditionary force.
Henri left Bizerte in February 1915. She was assigned to the newly formed Syrian Squadron intended to attack Turkish positions and lines of communication in Syria, Lebanon, Palestine and the Sinai.
Henri IV however was transferred soon after to the French squadron in the Dardanelles to replace the Bouvet and damaged Gaulois after the allies crippling losses in the passes on 18 March 1915. The Battleship shelled the eastern side Kum Kale fort Asiatic in support of the French diversionary landing on 25 April 1915. She provided afterwards close fire support for the troops until May. However she received eight hits during this mission.

Back home she was placed in drydock and repaired, and in 1916, she was assigned to the Complementary (Reserve) Division of the 3rd Battle Squadron. She served with the French Eastern Division in Egypt in 1917. She was sent in 1918 to Taranto to serve as a depot ship. In 1920, Henri IV was stricken from the List and scrapped in 1921, after 18 years of service. Considered as a hazardous experiment, constructon time and engineering errors meant she was obsolete at launch, both as a ship and as a concept, and did not provided any significant help to the Navy. 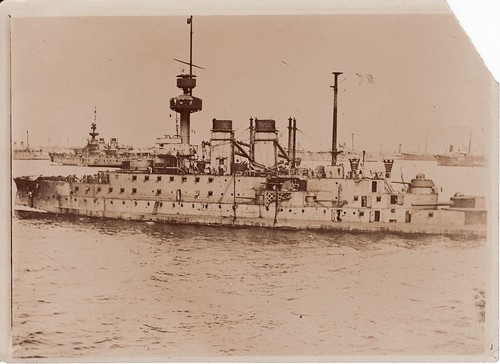