Soon, during civil war, the best Union naval policy chosen was to blockade the entire condeferate coastline by all means necessary, notably to halt confederate trading, make an efficient embargo on weapons and ships, and prevent any intervention by European powers : This was the famous “Anaconda plan”.

Although the Union fleet was sizeable -it dwarfed the Confederate navy by any standards- the task of convering a sea area so immense was daunting for the admiralty. In a stopgap measure, most ships were stationed in front of of major coastal cities and river outlets and deltas, like the Mississippi, the Chesapeake bay entrance, where the first american ironclads, USS monitor and CSS Virginia famously duelled.

The admiralty, and above the Secretary of the Navy Gideon Welles, devised specifications in 1861 for a light-draft vessel which could perform at sea and inshore, being built fastly and in large quantities (23 units) by many small private-owned shipbuilders. The engine natural choice seemed to be the recent design of two Russian gunboats engines by Benjamin F. Isherwood (then Navy’s chief engineer) at Novelty Iron Works in New York. 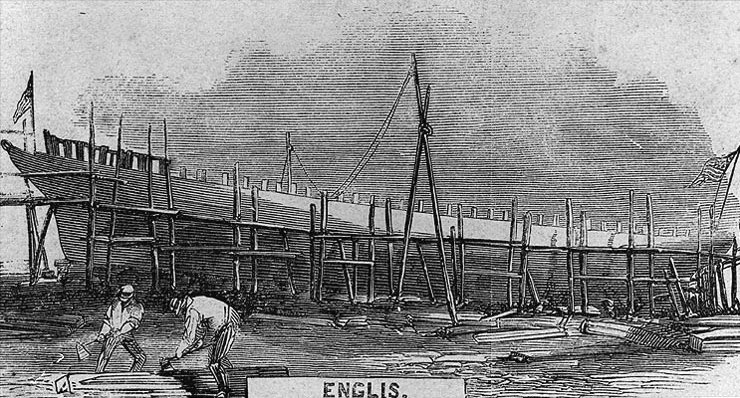 But the hull design was drawn by Samuel H. Pook, probably based on 1860 USS Pocahontas. The design was immediately accepted and the contruction of the engines began even before the Congress signed the contract for all ships, between june and july. The four first gunboats were built in a record time, only 92-96 days, earning their nickname.

The hull was made of white oak (frames keels and keelson), locust and live oak for port stanchions. Assembly was performed with corrosion resistant copper bolts, and structural weaknesses were corrected by diagonal iron braces and the stems by iron strapping. However unseasoned timber would have not been uncommon as their service life expectancy was deemed to be short.

They had one screw propeller, two 30-in bore by 18 in stroke horizontal back-acting (RCR) engines (fitted with Sewell surface condensers), fed with two Martin boilers (vertical tubular type, 60psi on trials, with two furnaces each), which developed 400ihp in all, giving these ships a speed of 10-11 knots. The sailing rig was of a schooner type, versatile, easy to use with little manpower.

Complement was 78-114 depending of the armament. This last depended on the builder’s stores, mostly for small guns. The main typical armament comprised a main centerline full traversing 3.7in (93 mm) Parrot RML (Rifled Muzzle Loading), one 11in (280mm) smoothbore, and two 24 pounder howitzers.

However, most of the engine were built by NY contractors, Novelty Iron Works, Morgan Iron Works and Allaire works. Cost varied from $90,000 to $103,500.

The Unadilla class gunboats were quickly posted in faction on all required blockade areas, revealing many ocean-going ships, corvettes and frigates of the Union for more useful duties. They will be in turn, backed by the Kansas class gunboats, and the Octorara, Sassacus and Mohongo side-wheels class gunboats, 55 purpose-built ships in all.

Appreciation of their performances were mixed. Some captains complains of them being poor sailors, rolling badly in bad weather, and suffering many breakdowns. After months at sea, the engine performance was degraded, and average speed fell to les than 8 knots. Plus their machinery was far heavier than expected, hence reducing their overall efficiency.

They were praised however in riverine operations, for their firepower and relatively shallow draught hull. They had a quite active history, besides their main duty of enforcing the blockade, providing gun support in many operations, including the battle of Port Royal (South Carolina, November 1861), were four were committed, gauging the Confederate local forces strength, and defeating two forts, leading to the eventual capture of the harbour.

Later on, in April 1862, no less than nine of these gunboats were enlisted in West Gulf Blockading Squadron’s David Farragut fleet to provide cover the the operations against New Orleans, then the most prosperous Confederate city. Three gunboats successfully remove the obstructing chain at the entrance of the Mississippi river and others silenced St Philips Fort and Fort Jackson. The expedition led to the surrendering of the city.

Next logical step was the city of Vicksburg. Some of these gunboats fought during the battle of Baton Rouge ending with the city’s capture. They soldiered during all the Vicksburg campaign, until the end of 1862. Last actions were the Battle of Mobile Bay (aug 1864), with Itasca, Sciota and Kennebec, and Fort Fisher, in 1864 and 1865.

Sciota was the only class casualty, struck a mine in Mobile bay waters on 14 march 1865. Although many gunboats were decommissioned and disarmed in 1865, many others managed to survive until 1869, serving with the Gulf Squadron, the North Atlantic squadron, and the Asiatic squadron (Aroostook and Unadilla), helping to clear the south-eastern China seas from piracy.

The USS Unadilla transported the new President of the USA, Andrew Johnson, for a stat visit to the king of Siam. All were sold to merchant companies, but their civil career rarely lasted until 1875-80 due to their rotting hulls caused by unseasoned timber