Skip to content
From the origins to these days: Naval Technology

About a definition of naval technology

All good university-like expose starts with a definition: Naval Technology could be summarized as all ways devised to allow mankind seafaring. It’s quite ambitious in its scope and we can only guess the subject would fill such space that the present website, naval-encyclopedia, would be just a part of it. In fact we deal with naval tech in all these pages. There are few posts where specifics about construction or innovations are not enlighted.

But in this section we will focus on a particular aspect of naval tech, related to naval warfare in general, but not only. Propulsion for example, belongs to both the civilian and military realms, as well as navigational devices, radars, sonars, and any other systems outside armament or protection, proper to military warships.
So on the long run, we will see various subjects, posts treated in standalone (like naval artillery) or smaller subjects, like those displayed here, linked to a menu with anchors.

A familiar sight on 20th century warships, which appeared and disappeared relatively quickly, like protection nets against torpedo attacks between the 1880s and the 1920s. With their appearance of winged torpedoes, suspended on superstructures, they look odd and familiar at the same time, but their role is somewhat a mistery for many: Paravanes has been a fad in naval tech, dedicated to mine and ASW warfare.

Paravanes on the deck of IJN Fuso (wow)

So basically, the Paravane is a towed underwater “glider”, a water kite. As a weapon, since it was given a warhead, the Paravane was used in anti-submarine warfare in general, and a British idea, developed from 1914–16 by Commander Usborne and Lieutenant C. Sir Dennistoun Burney. The project was funded by Sir George White, founder of the Bristol Aeroplane Company. It was initially thought of a way to destroy anchored mines, quite a deadly new weapon as shown by the Russo-Japanese war.

The principle was simple:
-The paravane was strung out and streamed alongside the towing ship, either from the bow or stern, but more likely the bow in order not to be perturbed by the propeller’s wake.
-The wings were designed to carry the Paravane away from the hull, creating a lateral tension on the towing wire.
-The idea was this cable could snag the cable anchoring a mine*, either severing it by sheer pressure or a cutter**.
-The mine was then bring to the surface where it could be fired upon and destroyed.
-If the mine cable could no be severed, the paravane would met the mine eventually at the end of the cable, detonating it*.
*A pull of about 7 cwt. the shears would cut a 1½ in. mooring-wire.
**The mine cable was guided into the jaws of shears or scissors made of special high-grade steel
**In that case, the Paravane did not need even to receive a warhead, hoping ot would hurt one of the sensitive Hertz horns.

In the 1920s the normal length of the towing lines was 56 yards and a ship carried several of these. Each one was a three three-strand steel rope made of 37 galvanized wires 0.049 in. in diameter. Their ultimate breaking strength ranged between 100 and 120 tons per sq. inch.

So in short, an anti-mine paravane was a towed underwater cable cutter. But the parralel one developed during WW1 was a proper weapon. There were basically three types of paravanes:

Destroyer paravanes, well used during both battles of the atlantic used a stern arrangement called a “depressor” to bring the virtual point of tow down to the required depth at the stern.

Anti-mine Paravanes were generally towed from the bow, using the “paravane chains” towed by the same capstans used for moorings cables. A ship towing two paravanes can ‘spread its wings’ of sweep over 200 feets. However for ASW paravanes, stern cables were used instead. They were maintained as low down as possible, with outboard ends kept about 100 ft away from the ship axis, creating a virtual swept a wedge-shaped track alongside the bow, at the level of the keel or below.

The idea was that when meeting a submarine (creating tension on the cable), the paravane could be remotelly detonated alongside the hull, along three ways:
> By direct contact through a striking-gear on its nose
> When the load on the line exceeded a predetermined value (the circuit closed).
> By manual imput on the other side of the electric line via a hand-switch.

The Paravane was a relatively cheap and simple weapon (much simpler than a torpedo) and could be towed up to 25 knots (46 km/h). Its recovery was reasonably simple also. Paravanes were stored in many ships, mostly battleships and cruisers in both WW1 and WW2. However new ways of dealing with mines and radical improvements in ASW warfare made it obsolete during the cold war. There are indeed very few examples of submarine sunk by paravanes, if any. The Paravane was used for about 30 years and used by all major navies of the world, following the Royal Navy example.

It should be noted the idea resurfaced with the 1940 “Z battery“, this time to destroy planes, and using a rocket. It proved too a failure in operation. However it seems the US Department of Defense continues to have some interest in paravanes. The term is also used for fishing “gliders” today. Also the Paravane is distantly related to the Oropesa, a towed sonar fitted inside a submarine glider. The latter is used to vary the sonar’s position in depht and spread. The system appeared right at the end of WW2 and became widespread in the 1970s for minesweeping operations and ASW detection.

Smoke screens in the Navy:

Although incendiary weapons were used at sea from the antiquity such as the Roman and Greek stinkpots and salpeter pots, and the early medieval Greek fire and its projector quite popular in the Byzantine Navy. This was times of relatively close warfare.
The earliest recorded use of smoke for the purpose of concealing a ship was the turtle ships in combat, with sailors burning materials creating a very thick smoke on the roof. 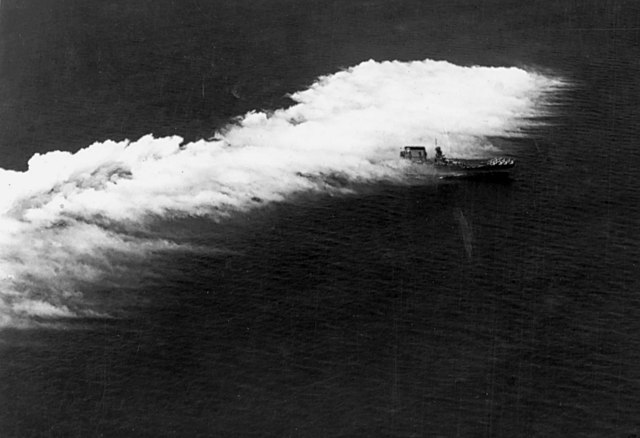 However the use of naval smoke was proposed by Sir Thomas Cochrane in 1812, as much an asphyxiant. Later during the American civil war, R.E. Lee, which commanded a blockade created a thick smoke screen to escape USS Iroquois.
However it would would until the first years of the twentieth century for clear evidence of deliberate use of large scale naval smokescreens.
This became a tactic. As gunnery pushed the ship ten kilometres afar and more, one tactic was to conceal the silhouette to enemy spotters. Its use was regulated, learnt, and practices in exercises. It was already known and well used during World War I, and even more during World War II. Event the introduction of radar did not changed its purpose, at least until better technologies to precisely locate a ship were available.

Smoke screens were created by relatively lighter ships in order to conceal them or others under the same blanket. Cruisers and destroyers were prime candidates for this. They were fast and agile enough to spray their smoke on a large area.

Using smoke screens had one main use: Conceal one of several ships in difficulty, badly hit and escaping for example. This was used most of the time this way, sometimes with the effect of really saving a ship. That was the famous case of HMS Exeter, badly beaten by the Graf Spee and probably on the verge of total destruction when the two light cruisers present at the battle of Rio de la Plata concealed her retreat in a thick smoke. The Graf Spee was herself damaged and this was sufficient to break the chase.

The concealment indeed could hide destroyers, just waiting the best opportunity to launch a volley of torpedoes. Destroyers following in line could create a massive, high curtain of smoke capable of masking the real strength of a fleet, including the smoke plumes.

In was deployed when dealing with coastal fortifications also. Allowing to conceal the ship behind smoke to the coast spotting control, whereas planes, well above it, could provided fire corrections.

It was also (and still is) used to conceal an approaching amphibious fleet. Slow landing crafts were an easy target, therefore smoke could disturb the spotters enough to not be able to hit a single one before the landing was done.

Smoke screens were proficiently used in the Baltic for example, in all sorts of operations and by all participants. They were often laid by motor torpedo boats and patrol boats. The Soviet navy used smokescreens laid perpendicularly to the direction of the attack to cover their MTB approach, in a bent zig-zag. The tactic was to lay it close enough to the target for a massed torpedo attack, without exposing the approaching crafts. 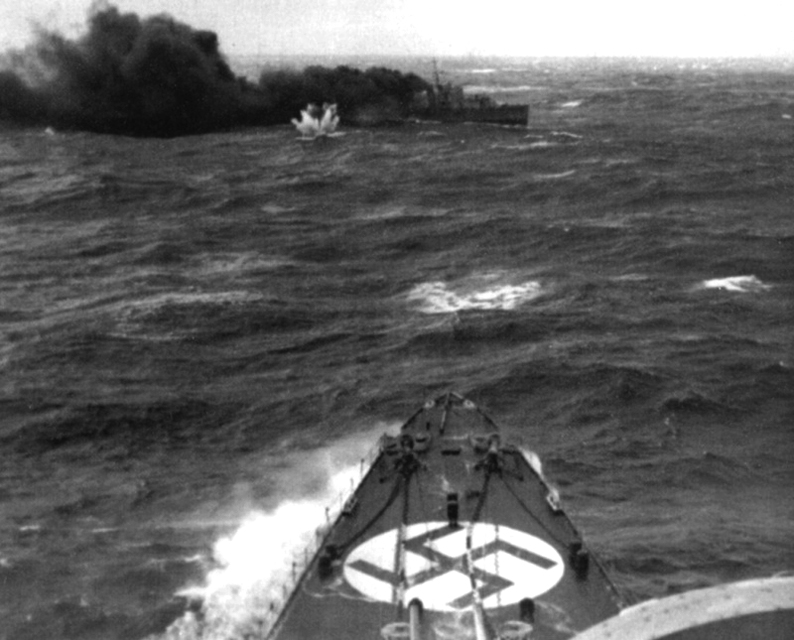 Smoke screens were also used with great effects at the Battle of Samar. As Taffy 3 was attacked by the main Japanese fleet, sneaking in the Philippines (part of the battle of Leyte), destroyers not only put an heroic fight to keep the IJN ships at bay, but also generously blanketed the slow and vulnerable CVs, sparing them certain destruction. How it was done ?
In general, the most common way was the same tanks used in the cold war: Injecting injecting oil into the boilers to create black smoke, which exited from the funnel, or chemical canisters disposed at the stern (creating white smoke), which were mostly used by cruisers.
By using planes, and special chemicals (nasty Titanium tetrachloride (FM) here), massive curtains could mask entire fleets, as shown by this interwar USN test: https://youtu.be/0_EdgP57l1Q

Naval smokescreen from WWII from CombatFootage

Could land Battleships have existed in reality ?