The Vought OS2U Kingfisher became the staple of the USN’s battleships and cruisers catapulted spotters/recce models, in the shape of a rugged and dependable floatplane. The Kingfisher lacks the aura of the fighters of that time, but they played a vital role when radar technology was in its infancy, and went on even the latter improved during WW2. The OS2U-3 became the Number one artillery spotter plane for battleships, its main task, while also performing long range reconnaissance and recognition of ships previously spotted on radar.

But they also carried personal, recovered downed planes or crews, and even hunted down submersibles. 1,519 were built, which also served in the Royal Navy, Royal Australian Air Force and even the Soviet Navy, and went on well into the cold war under other flags. Its direct competitor, the Curtiss SO3C Seamew, was never as popular.

The long lineage of USN seaplanes started in 1913 with the Benoist, and went on with Boeing, Curtiss or Douglas until catapults became mandatory onboard US ships, from battleships to cruisers. The Curtiss SOC Seagull (1934) was the last model in service in the majority of USN warships as a standard. Before that, Vought had provided the Navy with another dependable biplane, the O2U/O3U corsair. But as soon as the Seagull was introduced, the Navy started to search for a modern, ideally cantilever monoplane observation, spotter and reconnaissance floatplane. In the late 1930s, Rex B. Beisel, an engineer from Vought, was ordered by the direction to anticipate this need and starting the design of such observation monoplane. It was designed as a multitask aircraft, with more focus on range and visibility than speed. Beisel incorporated many innovations in its design in the hope to impress the USN commission, and planned for example an assembly with spot welding, a process developed in common by his company and Naval Aircraft Factory, in order to generate a smoother fuselage, that can resisted buckling and lower drag. Also innovative in this design were high-lift spoilers the unique arrangement of deflector plate flaps to cut the speed, and drooping ailerons, located on the trailing edge of the wing. They were deployed to increase the wing camber and generate additional sustentation, sparing the engine, when catapulted.

R-985 engines from Pratt & Whitney being mounted on fuselage cells at the Vought-Sikorsky factory, 1940.

Rex Beisel completed the prototype Vought Model VS.310 which first flew in 1938 under the Navy designation XOS2U-1. It depended at the time from a dependable 450 hp radial Pratt & Whitney R-985-4 ‘Wasp Junior’. The same also propelled the de Havilland Canada DHC-2 Beaver, Grumman G-21 Goose, Vultee BT-13 Valiant and in 1946, the Sikorsky H-5.
The prototype was provisioned to carry a single .30-caliber Browning M1919 machine gun firing between the engine cylinder heads, an a radio operator manned .30-caliber on a flexible Scarff ring mount at the rear plus underwing pods to carry two 100 lb bombs/325 lb depth charges. The design was also interesting as he devised a simple plugin system to remove quickly the floats and convert his plane with a fixed wheeltrain. So wile package was found well-thought by the USN which approved a pre-serie of 54 planes called ‘OS2U-1’ in 1939, but with a more refined engine, the 48 version of the P&W Wasp Junior. The U-2 was later produced in 1940 with minor alteration and large production. But the bulk of it was represented by the U-3 (1941)

The main objectives of the design were to have a relatively versatile long-range plane that can defend itself and be sufficiently rugged. For observation, although it was a cantilever monoplane (low wing), there was a generous cockpit with a large canopy providing an excellent visibility to both crewmen, the pilot in front of the wings, and the observer/radio/gunner facing rear. There was another seat in between to carry personal if needed.

Since the U-1, the Kingfisher had a fixed, forward firing .30 in (7.62 mm) M1919 Browning machine gun in the nose, between cylinders, and with a 500 rounds belt. There was also a single, navy specs .30 in (7.62 mm) M1919 Browning machine gun fed with 600 rounds in belts, on a flexible mount manned by the observer. However it was replaced ofter by a twin mount for a better defense. nevertheless which that power and the massive floats, the OS2U had little chances to win a duel with any fighter. There is no record of any ‘kill’ by a Kingfisher anyway during WW2.
The plane proved to be not only an observation and spotter, but it was also sometimes used for offensive missions, carrying 650 lb (295 kg) of bombs or depth charges under the wings, providing an extra ASW capability to cruisers and battleships. As a slow target, it would have little chance to service the AA battery of most warships of the time. There are many occurences however during ww2 when these planes strafed land objectives, but no reported submarine kill.

An evolution tested in 1942 with narrow-chord, high-aspect ratio wings and full-span flaps, tested but not adopted by the USN. Two prototypes only.

This was the NAF (Naval Aircraft Factory) Navy owned manufacturer version, which delivered 300 U-3 in total in 1942-45. They were propelled alternatively with the Pratt & Whitney R-985 AN-2 or the AN-8 engines.

The kingfisher in action

Adopted as first standard onboard battleships and cruisers, as a catapult-launched scout plane, the Kingfisher soldiered on until 1945 with the US Navy and proved to be dependable and rugged. Pilots liked it, eve, knowing it slow speed and limited manoeuvrability. The Curtiss SO3C Seamew, its rival had half its production and was supplied when the Kingfisher could not be obtained. It equipped mostly cruisers and was also more massively used in lend-lease. In short, the USN preferred the Kingfisher by far. The Kingfisher was supposed to replace the Curtiss SOC Seagull, but the latter served much longer than planned as the SO3C Seamew had a weak engine and passed as a complete failure. The Curtiss SC Seahawk however slowly replaced it from October 1944.

The Curtiss Seahawk, which started to replace the Kingfisher in late 1944.

It would be too long to report their “battle records” as their main task was not glamorous, consisting of reconnaissance above all. Their main task, even after the adoption of radar, was to go beyond the latter’s range (often limited to 30-50 km), recognising in detail the composition of an enemy fleet and report it by radio. Until the the radar operator only had a “blob” under his eyes, not very useful to a fleet commander. When an engagement commenced, Kingfishers were used to report artillery splashes close to their target and send corrections. This was at least in theory, because it was a dangerous job. Some IJN Cruisers in particular used to store floatplane fighters to deal with these, not counting carrier aviation or AA. Thus, in 1943 as gunnery radars became more accurate, this role was mostly dropped.

The first 54 Kingfishers started operations in August 1940, 6 were in Pearl Harbor by the end of the year. The bulk of 158 OS2U-2s were attached to flight training, Naval Air Station Pensacola in Florida, and 53 equipped the Inshore Patrol Squadrons based at NAS Jacksonville in Florida. In 1942, nine Inshore Patrol Squadrons were established using the Naval Aircraft Factory OS2N-1s.
During the island hopping campaign the AA was less present and they could do their fire correction for shore bombardments, until the end of the war.
Instead, Kingfishers were used for patrolling large areas and carrying personal and supplies in some case. Another mission was air-sea rescue. Some pilots were high-profile celebrities, like WW I ace Eddie Rickenbacker which flew one during his service in the Pacific from November 1942.
This is one case in particular that deserves mention, to underline the ruggedness of the Kingfisher:
-Lieutenant John A. Burns’ on 30 April 1944 rescued and taxied airmen in Truk Lagoon, seven in all, brought to the submarine Tang. In all her rescued 10 survivors on two trips, carried on the wings. Her was awarded the Navy Cross (below).

The Australian Kingfisher I: Their 18 planed came frem a batch initially ordered by the Dutch East Indies, diverted to Australia in 1942 after the fall of Java. They were used for training at first but by 1943, equipped No. 107 Squadron RAAF for convoy escort. The unit was disbanded in October 1945 but one was kept to participate in the Australian National Antarctic Research Expedition in 1947–48 (many from other navies also participated).

In addition to the USN, the United States Marine Corps operated a few planes (mostly for tests), and the United States Coast Guard obtained 40 aircraft.
Australia obtained some of the 100 Kingfisher I, affected to the Royal Australian Air Force No. 107 Squadron RAAF. Other countries in south america obtained the floatplane ad started operating it in 1942: Chile (15, retired 1957), Cuba (4, until 1959), the Dominican Republic (3), the Mexican navy (6, with 201 Squadron), Netherlands (24 delivered after 1945), the Soviet Naval Aviation, just 2 aircraft used on the Murmansk (ex-USS Milwaukee, transferred by lend-lease), the Uruguayan Navy (6 under Lend Lease, also in 1942).

Cuban OS2U-3, now at the revolution museum in Havana. They served until 1959.

In the USN, the Kingfisher was phased out in 1949-50 from all surface ships as radar improvements made it obsolete. They were mainly kept for liaison and training. They survived however for much longer in the Coast Guard, and few were lost. So many survived the 1950s in good conditions and were maintained in flying condition to this day.
In Australia: OS2U-3 in Whale World, Albany pending restoration, former KNIL transferred to the RAAF in 1942, now at Pioneer Aero Ardmore New Zealand.
Chile single OS2U-3 at the Museo Nacional Aeronáutico y del Espacio de Chile, Santiago.
Cuba: OS2U-3 in wheeltrain configuration, Museum of the Revolution (Museo de la Revolución), Havana, Cuba.
New Zealand: OS2U-3 serial 5985 at Pioneer Aero, Auckland, New Zealand undergoing restoration (see above), and another.
United States: One displayed inside the aircraft pavilion adjacent to the USS Alabama in Mobile. Another id displayed at the Boeing Aviation Hangar, Steven F. Udvar-Hazy Center, National Air and Space Museum (Dulles International Airport) Washington DC. Another exposed by the North Carolina Battleship Commission, one at the National Naval Aviation Museum at NAS Pensacola, Florida and some in storage at the Yanks Air Museum, Chino, California, pending restoration as well.

No video unfortunately, but some 12 min. of footage in timely music. see also 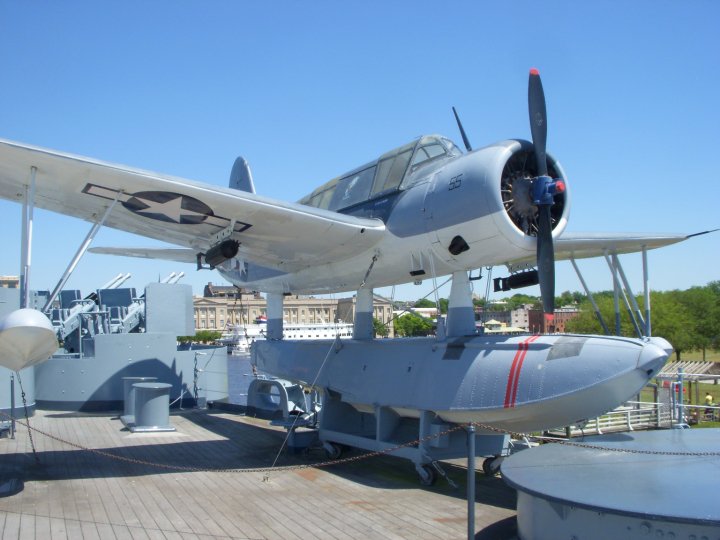 The prototype XOS2U (1938). Notice the rear canopy curve, later simplified for production and hooks under the main floats. The Kingfisher was equipped with the same engine, and its iterations with no performance increase all along its career.

Vought OS2U-1 of the first Inshore Patrol Squadron based at NAS Jacksonville, Florida, 1941

OS2U-3 in Soviet service with the Northern fleet, cruiser Murmansk, 1945.

Chilean Navy OS2U-3 deployed in the Antarctic Mission in 1947