The 1956′ Chengdu class can be summup as the Chinese “Riga” class. The latter were the standards mass-built Soviet ASW frigates of the Soviet Navy. Although they were delivered at the same time than the four Gnevny (future Type 07 Anshan class destroyers), these frigates arrived from the Soviet big brother shipyards in “kit”, for local assembly. They were hardly equivalent to licence-built ships, based solely on blueprints. Anyway, these ships became the Type 01 Chengdu-class and made the bulk of the very small Chinese PLAN until the arrival of the Luda. In between other frigates will enter service, the Jiangnan class in 1967-69 and the Yintang class in 1973, the two being developments of the Riga hull. Even the later Jianghu mass-production class which spanned 1975-1993 were developments of the same original hull which basically endured the whole cold war for the Chinese the same way PLA’s Type 59 MBTs were declined into the Type 69/79 and 88 MBTs.

About the “Riga” class

As a foreworld, the Soviet “Riga” class (a NATO designation) was known in USSR as Storozhevoi Korabl (escort ship) Project 50 Gornostay (Ermine stoat). They were basically Soviet reinterpretation in the 1950s of the classic escort destroyers of WW2. The design was simple, rugged and sound, and as customary was produced from 1953 to 1959 to an extent of 69 vessels. It made perfectly sense to distribute these to Warsaw pact nations like East Germany, Bulgaria, Finland and a faithful Asian customer such as Indonesia. There was nothing revolutionary about these ships, which primary armament counted rapid-fire dual purpose guns 100 mm completed by AA an array of 57 and 37mm mounts, while ASW was limited to depth charges and two or three 533 mm torpedo tubes, some ships having a set of MBU 600 anti-submarine rocket launchers later replaced by two RBU 2500. They were easy to recoignise with their fluch deck, pointed prow and central superstructure, including the funnel. Speed, given the nature of submarines at that time, was not paramount, with just 28 knots (52 km/h; 32 mph), but range was, and these surprisingly NOT diesel-powered ships had a comfortable 1,950 nmi (3,610 km; 2,240 mi) range at 14 kn (26 km/h; 16 mph). In Soviet service the Riga were discarded in 1980s, whereas the Chinese Chengdu soldiered on for another decade. 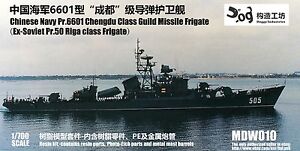 Specifics of the Chengdu class

In their new denomination they became the Type 6601 (Chengdu class) these kits were assembled by the Huangpu Shipyard in Guangzhou, and Hudong Shipyard in Shanghai from 1955 to 1958. But soon problems appeared, to start with finding an appropriate power source for these frigates. The Riga class had a TV9 steam turbine the Chinese were incapable of replicating, and at the same time this was a fuel-hungry unit they found unsuitable for their needs. Therefore rather than to start again from the TB-8 and TB-9 models China was currently cloning (with some difficulties), engineers choosed the simpler and proven 37D diesel 9ED743/76 available at that time and already manufactured locally for the Chinese “Whiskey” class submarines. However this power unit was incapable of doing reverse speed, but the 37DR diesel was. The 37D also had a rather low power rate, end performances risked to be weaker than the original Riga. Eventualy the 9EDZ43/76 was chosen for the Type 065. Later on, cloning the 37DR engine proved impossible. To house the massive 9EDZ43/76 PLAN engineers had to split-level the deck for 3/4 of the length. Other improvements concerned the propellers, and tests shows the new vessels were able to reach 21.5 knots.

Aerial view of the Riga class, giving some idea of the Chengdu initial design

Although in general design, these ships were completed as Riga-class frigates, there were some room for improvement. As a result, Chinese engineers decided to have them slightly more heavily armed than the standard Riga class: The best example was the two twin 25 mm gun mounts replaced by a second pair of twin 37 mm gun mounts, and the original RBU-2500 ASW launchers of the original late series was replaced by RBU-1200 on the Chinese PLAN Type 6601. Indeed there was no way for the Chinese to replicate the Soviet 100 mm B-31 guns, but instead, some same-caliber V-34 56 cal. procured as shore guns could be used as a replacement. They were manually loaded and had a 22.4 km range, and a semi-enclosed turret. The weight and superfiring problems with raised superstructures and therefore lower stability in the China sea, prone to typhoons, led engineers to devise a one front-tow rear configuration. The 37-mm posed no problems as they were copies of the Soviet BU-11, manualy operated too. Without any fire direction radars, these guns needed good weather and calm seas to be effective, but were reliable and simple. All units were converted to final Type 01 in the early 1970s with new electronics.

Type 01 (Chengdu class)
By the early 1970s, Type 6601 class went through mid-life upgrade with their torpedo tubes replaced by a twin launcher for SY-1 anti-ship missiles. Although redesignated as Type 01, these ships were still called Chengdu class. They were retired in the 1980s.

About the SY-1 missiles:
These were Chinese copies of the Soviet P-15 Termit antiship missile, produced at Factory 320 (Nanchang Aircraft Factory) and designed by Li Tongli and Lu Lin. The Chinese SY-1 missiles replaced the original, unreliable aneroid altimeter of P-15 Termit by a new radar altimeter. The SY-1A, had an even better mono-pulse terminal guidance radar seeker. It was codenamed NATO CSS-N-1 Scrubbrush.
Specifications: 6.55 x 0.76 x 2.4 m (wingspan), Weight 2,095 kg with a 513 kg shaped charge high explosive warhead. It was propelled by a liquid rocket engine coupled to a solid rocket booster and reached Mach 0.8 with a range of 150 km at low altitude, beyond 20 meters. Guidance comprise Inertial and active conical scanning terminal guidance radar, later active monopulse radar. It had a single-shot kill probability of 70%.

Impression of the Type 065 Frigate (Conways)